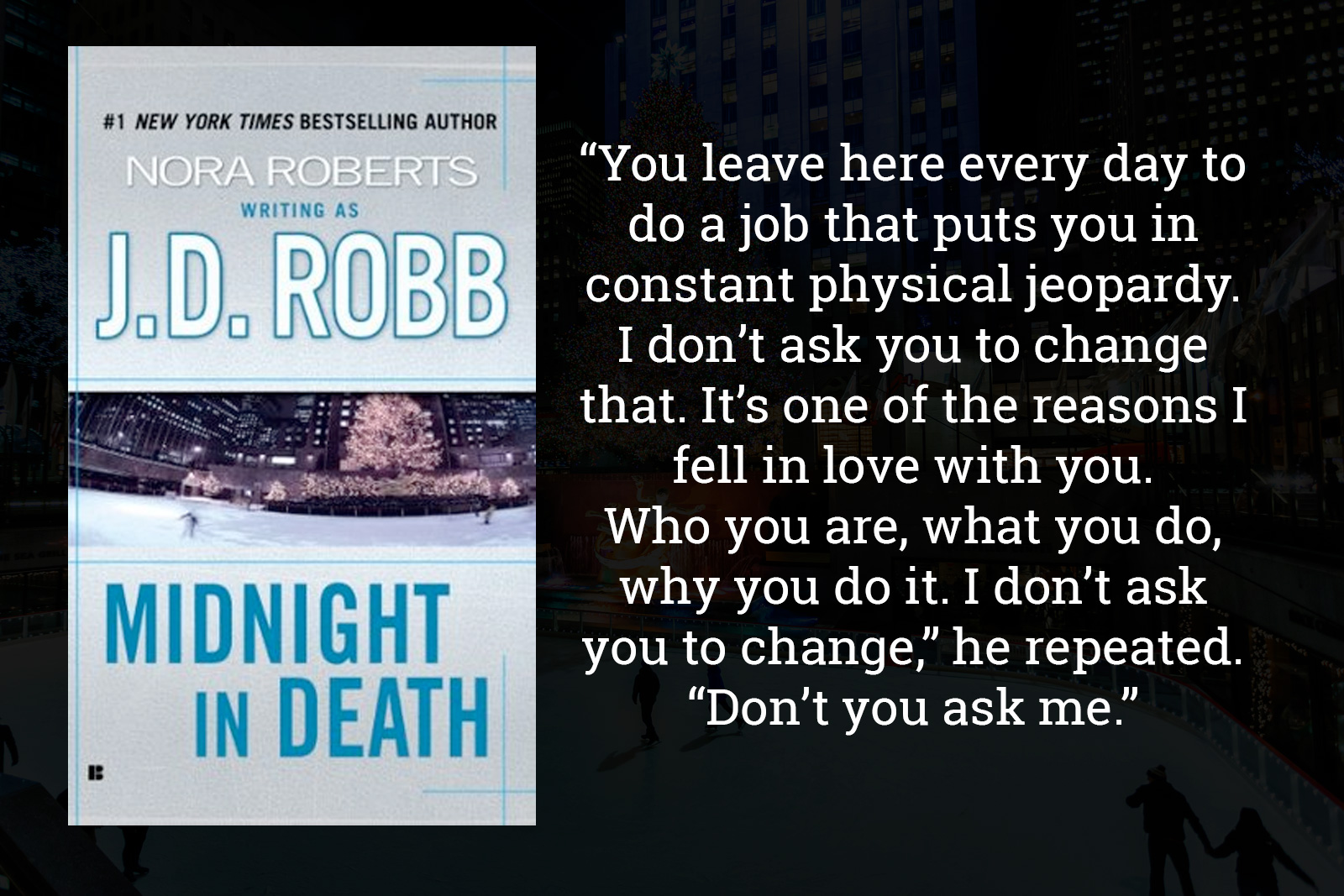 Podcast in Death
Book #7.5: Midnight in Death by J.D. Robb

We review “Midnight in Death.” This is Nora’s first “In Death” novella. This novella originally appeared as part of the “Silent Night” Anthology which also included novellas by Susan Plunkett, Dee Holmes, and Claire Cross.

Our overall feeling about this book is that it’s a bit unsatisfying, and we think that’s because this is such a short book and although it has everything in it that we would want from an “In Death” book, we just want more of it! So many great moments in this book, but again, we want them in a full length book.

As we have noted with the other books we read, the plot device that Nora has used for this book is, surprise, surprise, MIDNIGHT! All of the murders that happened in this book happen at midnight, and the murderer gives Eve an ultimatum to meet him at midnight on new years eve, or he will kill Dr. Mira.

The murderer is David Palmer, someone Eve had helped put away before. But he managed to escape an off planet facility?? We really want to know how that happened, but we don’t know because Nora couldn’t put all that into a novella.

Eve and Summerset have called a truce for Christmas, so no throwing her jacket over the newel post for Eve. We also love hearing about how Galahad spent his Christmas.

People always want to see all the characters from previous books make an appearance, and in this book, Nadine makes an appearance, but that seems weird to us. Why did Palmer contact Nadine? Then we never see Nadine again?

This book also has a YANNI (Yet Another Noticeable Nora Inconsistency), where Morris is called “Morse” and we really wish Nora had a better editor back in the day.

Just like Summerset, we’re all irritated by the fact that Eve would put “Seal-it” onto the brand new gloves that Roarke gave her for Christmas! She should have known they were expensive gloves that might get ruined by “Seal-it.” Take your gloves off before you seal up, Eve!! But also, why is Roarke giving her gloves like that knowing that she would get blood and crime scene gunk and seal it on them!? Also, would people in 2058 still be wearing actual fur?

As some of you might remember, we said in our “We Review the Reviews: Shadows in Death Edition” we thought people who say Eve is a “strictly by the book” cop who would never “cross the line” just don’t really know Eve. In this book we are reminded of that when she tells Feeney:

“If he hurts her, I’m taking him out.” She lifted her gaze again. “Whatever line I have to cross, I take him out.”

We love the gift that Peabody gives to Eve…really, all the gifts given in this book. Then we go off topic and talk about gift giving during Christmas.

The end of this was a bit abrupt and weird, because Roarke rushes into the basement of David Palmer’s house to see Eve take Palmer out, and put out a fire, literally, but nobody else rushes in? Then Mira just walks out of the basement by herself, to leave Eve and Roarke alone to have a moment. This all seems weird, like we said, but what can you do?

One of our listeners, Michelle, corrects Jen from the last podcast. Jen insisted that at the end of “Shadows in Death,” Brian Kelly just happened to be at the Lannigan farm to pick up a “Jumper” or a sweater that Sinead made for him. But Michelle points out that Roarke says he sent a “jumper” (or a “puddle jumper”) for Brian, which is a small airplane, to bring Brian to the Lannigan farm to help take down Lorcan Cobbe. Jen still wants it to be Brian picking up a sweater from Sinead, and may write a fan fiction where Sinead makes Brian a sweater.

Then we go off topic a bit to talk about fan fiction.

We read some comments about the “We Review the Reviews” episode, and how much you all loved it. Don’t worry, there will be more of those coming! 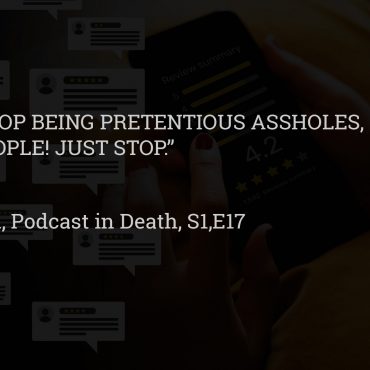 We Review the Reviews! Shadows in Death Edition

Podcast in Death
We Review the Reviews! Shadows in Death Edition

Throughout the years that we have been members of this fandom, we have seen every criticism of the “In Death” series that could possibly be written. In this podcast we […]