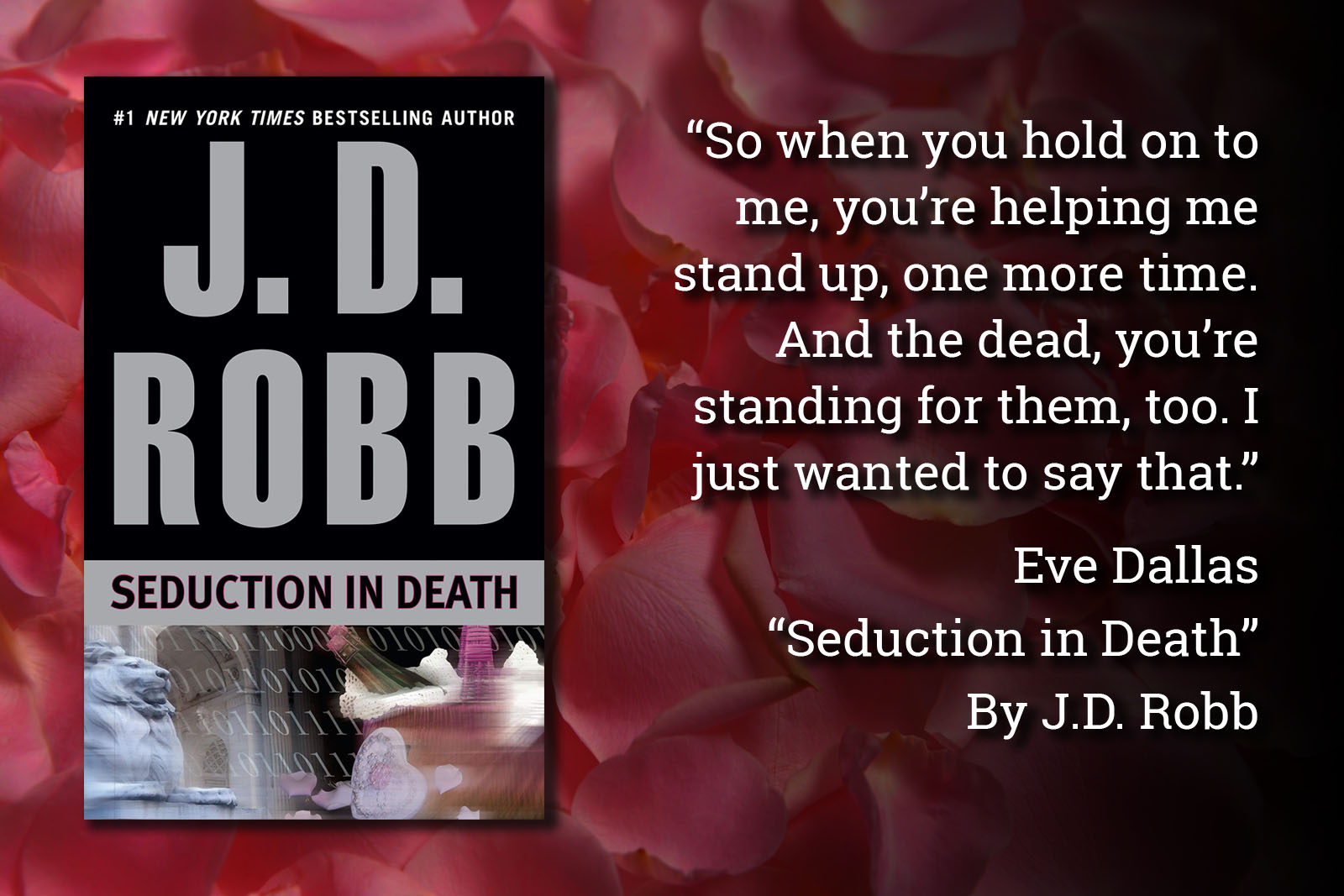 Podcast in Death
Book #13 Seduction in Death by J.D. Robb

Okay y’all, this is another LONG episode, so be prepared.

Also, Jen was VERY sick for this one, so, she gets a special commendation from us for being a trooper, and for remembering to mute every time she had to excuse herself.

This book opens with Eve having a horrific nightmare about her father. She’s barely settled from that when she gets called to a murder scene where the victim has been thrown off her apartment balcony right in front of Dr. Louise Dimatto!

The bad part of this book is that this case has a very heavy sexual component to it, and that is very triggery to Eve, so Eve is having kind of a hard time with it. It also makes this book a bit more creepy for the reader. The two murderers are turning the murders into a competition, and it’s really gross.

Since Jen is a medical professional, she explains to us why the combination of the two drugs used in this murder are very bad.

One component to the murders here is the online dating angle, and we discuss a bit about Eve being a bit judgy about that.

The next day after the first murder, Eve visits Dr. Dimatto at her clinic and finds out that instead of just the $500,000 that Eve was supposed to give to Louise for the clinic, Louise actually got 3 Million, and Eve knew nothing about it. Louise also tells Eve that Roarke has opened a shelter for abused women and children that he called “Dochas.” This is another thing that Eve didn’t know about. She and Roarke had a conversation about that, and Eve tells Roarke how proud she is of him.

A lot of “seduction” is happening in this book. Not just where the murders are concerned, but there are a lot of “blah, blah LOVE” moments between Eve and Roarke and people keep walking in on them. We have McNab attempting to seduce Peabody, Charles and Louise attempting to seduce each other, and even Feeney might have been trying to seduce his wife while wearing cute pajamas with hearts on them.

We also appreciate the many affectionate but platonic friendships in this series like between Peabody and Charles or Peabody and Roarke, or even Louise and Roarke. Also Roarke’s “BrOTP” with McNab and Feeney both.

But the one person who doesn’t care for the Louise and Charles pairing is McNab, who storms over to Charles’ apartment and gets into a fistfight with him which Louise stops by dumping water on both of them. Then McNab heads over to Peabody’s apartment to tell her he beat up Charles for her, and Peabody finds that to be irresistibly sweet. Go figure.

If all that wasn’t enough, during the investigation, Eve and Peabody come across two drug dealers about to fight, and while trying to break that up, Eve is cut.

Later on, Eve also spars with a fellow cop who has a problem with how Eve handled the case in “Judgement.” The asshole cop, Renfrew, tries to report Eve to Witney, but is unsuccessful.

To catch the murderers, Eve sets up a sting operation where she will impersonate a Stephanie Finch who had a date set up with one of the murderers. This requires Eve having to invite Mavis and Trina over to make her up to look like Finch, which is terrifying to Eve, but ultimately very successfully makes Eve look like Finch.

BUT…before the op goes down, Eve wakes up sick and Roarke loses his mind. The situation requires that Summerset tend to Eve and drop some pearls of wisdom on her which is almost as terrifying as a round with Trina.

In the end, the operation is successful, and Eve puts both murderers in jail. BUT, one of the murderers gets out, kills the other murderer then kills himself.

After a heavy case like that, Eve suggests to Roarke that they take some time off. 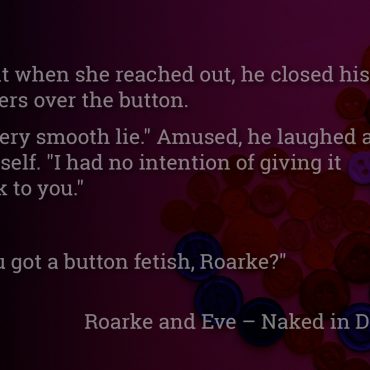 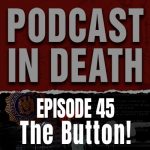 Podcast in Death
The Button!

This week we talk about The Button! One of the best romantic plot devices that Nora has ever created for any of her books ever. There are many button moments, […]