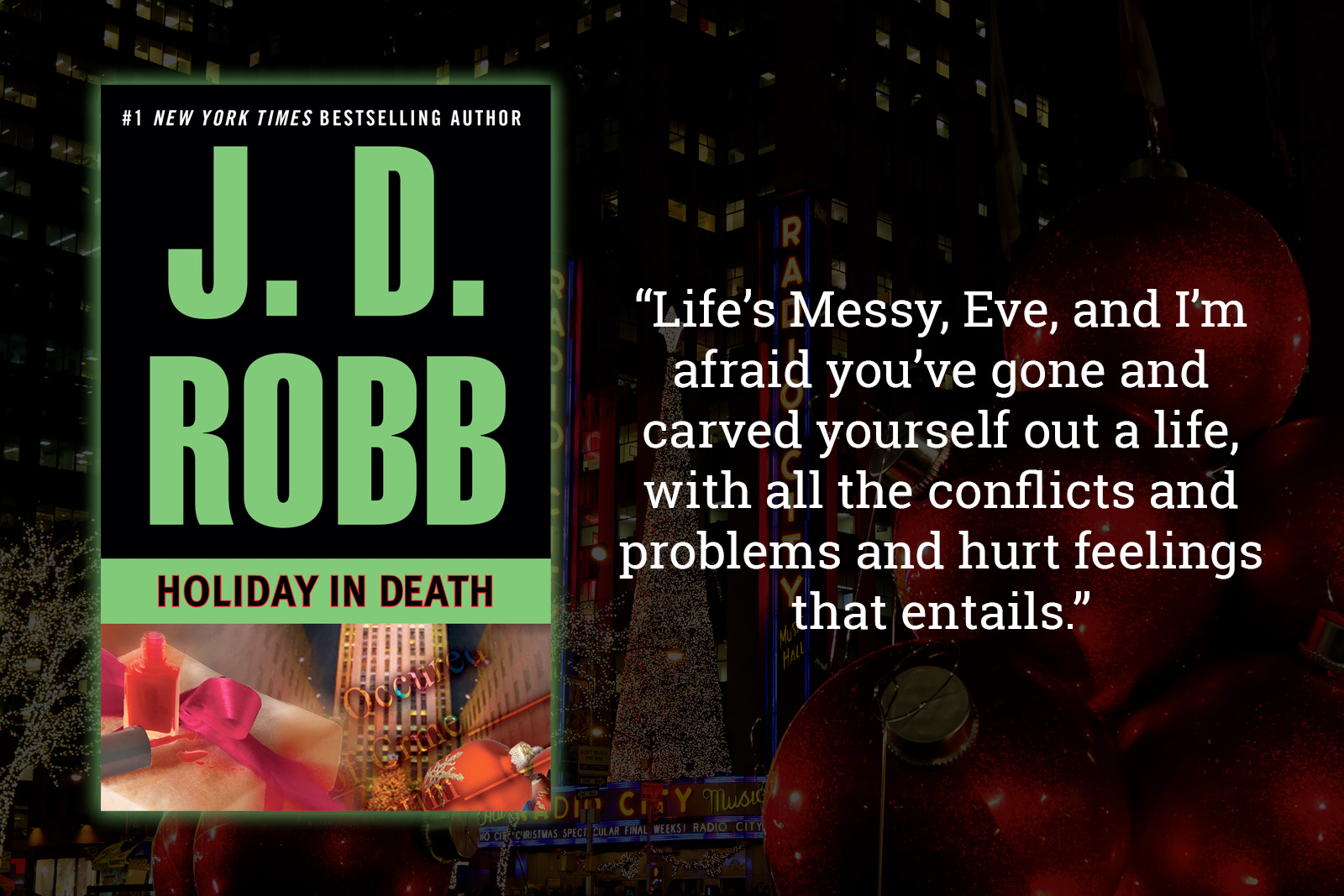 Podcast in Death
Book #7: Holiday in Death by J.D. Robb

NOTE: Something went terribly wrong with AJ’s mic. She fixed it as best as she could, but it still sounds weird, s0…sorry!

Sorry if these show notes are brief, everyone! Both AJ and Tara left on road trips on Thursday, and Jen is spending some quality time with her feet up binging some of her favorite shows! But…Here we go…

This week we review Holiday in Death by J.D. Robb, and we have to be honest with all of you, none of us were feeling it, and we’re not sure why. We do love the parts where Eve and Roarke are trying to figure out how to do Christmas. Roarke, as usual, goes overboard. Eve, as usual, is irritated by the whole business because she hasn’t had a proper Christmas ever.

This book is essentially about GIFTS! We love that Eve keeps telling Peabody not to shop, then Eve ends up buying a gift for someone else on her list.

Peabody marched up just as Eve was accepting the festive red and silver bag. “You shopped,” she said accusingly.

“No, I bought. There’s a difference.”

We found out that many of you listeners are like Eve when it comes to shopping, and we all are too, though, Tara does lean a little in the Peabody shopping crew.

Peabody is really put through the ringer in this book, not only with her date with the creep who assaulted her, but then Eve’s getting pissy when Peabody brings Charles to the Christmas party, and Peabody has to tell Eve to mind her own business. THEN, Peabody gets assaulted by the killer! But even though Peabody’s been through so much, we felt it was kind of swept to the side, and that’s not cool, man.

Eve is very much on the edge with this one as well. Something about the nature of the crimes and the weird Piper/Rudy relationship had her looking in the wrong direction, then she’s pissed that she missed major clues. THEN, when the bad guy assaults Peabody, Eve is literally contemplating murder herself.

The ending seems off for all of us, and we’re kind of happy we’re finished with it. Sorry to all of you who love this one.

We also talk about how each of us feels about Christmas. Jen recalls an old argument on one of the Nora forums years ago about a mistake that was made in this book. That had us going off topic about how weird fandoms can get, and we talk about that weird time when someone on the In Death Dot Net forums reported AJ to the FBI!

Podcast in Death
Special Guest Francesca from The Fangover Podcast

This episode we discuss the paranormal aspects of this series with Francesca from The Fangover Podcast! Francesca has also been a blogger with the Under the Covers Book Blog for […]